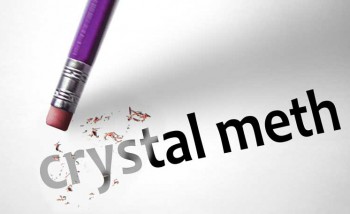 Related chemically to amphetamines, Methamphetamine does have some narrow medical uses: it is sometimes used to treat narcolepsy – a disorder in which the person falls suddenly into a deep sleep, attention deficit disorder, and as a short-term therapy for obesity, so while it has a high potential for abuse, it is available for legal use only through a non-refillable prescription.

It is important not to confuse methamphetamines with other drugs that have “meth” in their names: dymethzine and methatrial (injectable steroids) and methyltestosterone (an oral steroid); and ecstasy and its “relatives” which are 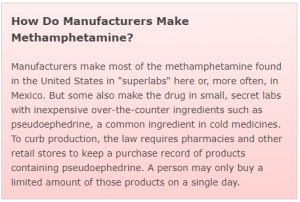 Since, according to the Office of National Drug Control Policy, Methedrine® is used on the street to refer either to broad amphetamines (of which methamphetamine is one, but not the only one) and also to 3,4-methylenedioxymethamphetamine (ecstasy), there is obviously some confusion in the identification of these substances among people who use them, and care must therefore be taken in identifying what “meth use” or “Methedrine® use” actually means.

Drugs or substances that are not sold over the counter (OTC) are divided into five schedules, labeled with Roman numerals. Schedule I is for drugs for which there is no currently acceptable medical usage in the U.S. It includes, for example, heroin, LSD, and marijuana. For Schedules II-V, all drugs with medical use, the least restricted is Schedule V, which includes medications like cough medicines with codeine; the most restrictive is Schedule II, which includes highly addictive drugs like morphine, cocaine, and methadone. Methamphetamine is classified as Schedule II.

The history of methamphetamine begins with the synthesis of amphetamines, according to “Methamphetamine: What we know about it, What we’re doing about it,” published by the Alberta (Canada) Alcohol and Drug Abuse Commission (AADAC) in 2006. Amphetamines were synthesized for the first time in 1887 by a Romanian chemist, Lazar Edeleanu, at the University of Berlin. Methamphetamine itself was first synthesized in 1919 by a Japanese research, A. Ogata and came to market in the 1930s as Bennzedrine®, an OTC inhaler for congestion.

Stimulant effects were reported in 1933 and amphetamine-related psychosis in 1938. This led to a change so that amphetamines required a prescription, beginning in 1939. In the 1940s, amphetamines were used to treat a variety of conditions. Methedrine® was released, and both amphetamines and methamphetamine were used to help World War II soldiers stay awake. The addictiveness of methamphetamine became clear after the war ended and the military supply of the substance was made publicly available in Japan.

Nevertheless, Methedrine® was joined by Dexedrine® in the 1950s, and both were used for several ills, as well as to enhance performance for athletes and people who needed to stay awake, such as truck drivers.

The sixties saw a surge in use, and the seventies included a crackdown, with supplies dropping, beginning with the Controlled Substances Act of 1970. In the eighties, a new method of production was invented, increasing availability again.

Use grew through the nineties, with most of it coming from illegal laboratories, and therefore sometimes being of questionable quality. In the early 2000s, the number of laboratory seizures in the Northeastern U.S. alone was near to or over 100 and production in Mexico is reportedly stepped up as well.

The History of Methamphetamine Sources: