Nonmedical Use of Various Opiates by Students for Year 2005

The use of opioids depends to a certain extent on the particular drug in question.

Opioids carry the risk of addiction, which is why they are “scheduled” drugs. They are abused both in overdoses when prescribed and used outside of prescriptions to get high, often accompanied with alcohol. 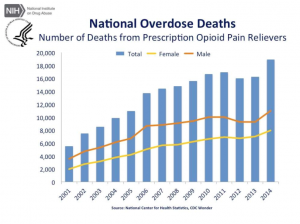