Cocaine drug abuse is very serious. Cocaine is a highly addictive drug that can have long-term health effects.  A cocaine overdose can be deadly and can occur on the first use. It is important to understand what cocaine is and how it affects your body. A cocaine high generally lasts only 5-15 mins, resulting in frequent use and abuse of the drug. The following cocaine statistics show how many people are using cocaine from a number of demographics. If you or a loved one is experience a cocaine addiction problem, seek medical help and addiction treatment and recovery options immediately. 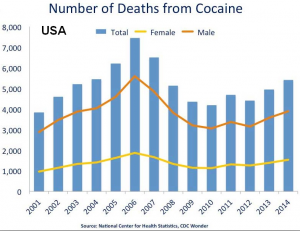 Researchers continue to look for medications to block or reduce the effects of cocaine for use as part of a comprehensive harm-reduction program. The desired medications would help alleviate the severe craving that people in treatment for cocaine addiction experience.

In addition, alternative behavioral interventions, such as cognitive behavioral therapy are effective in decreasing drug use. Therefore, a combination of treatment and services for each individual is critical to success.