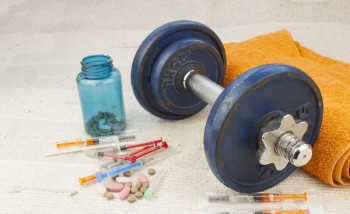 Anabolic/androgenic steroids are used medically to promote the growth of skeletal muscle – their anabolic effects and male sexual characteristics – their androgenic effects. When a male’s body produces too little testosterone, resulting conditions such as delayed puberty and some kinds of impotence, as well as body wasting in patients who have AIDS (acquired immunodeficiency syndrome) can be treated by administration of anabolic steroids (as they will be referred to here).

In the United States, anabolic steroids are a prescription medication; that is, they are not sold over the counter (OTC). Drugs or substances that are not sold OTC are divided into five schedules, labeled with Roman numerals. Schedule I is for drugs for which there is no currently acceptable medical usage in the U.S. It includes, for example, heroin, LSD, and marijuana. For Schedules II•V, all drugs with medical use, the least restricted is Schedule V, which includes medications like cough medicines with codeine; the most restrictive is Schedule II, which includes highly addictive drugs like morphine, cocaine, and methadone. Anabolic steroids are placed in Schedule III.

The anabolic steroids that are most commonly abused according to the National Institute on Drug Abuse (NIDA) are:

Anabolic steroids are not the same as steroidal supplements, which are OTC substances legally available in stores such as health food stores. They include dehydroepian-drosterone (DHEA) and androstenedione, referred to in street talk as Andro. These supplements can be converted by the body into testosterone, but their effects and attendant side effects have not received the research attention that anabolic steroids have.

The synthetic compounds called anabolic steroids were developed mainly as a treatment for low testosterone production (hypogonadism) that inhibits normal growth and development, as well as sexual function. This occurred in the late 1930s. During testing, the ability of anabolic steroids to encourage skeletal muscle growth in lab animals was noted. This led to the use of anabolic steroids by athletes including bodybuilders and weightlifters, and – of recent note (July, 2006) – baseball, track and field, and cycling. Suspicion surrounding Barry Bonds and his trainer Greg Anderson, Justin Gatlin, and Floyd Landis – respective practitioners of those three sports, are currently in the public eye as accusations about the use of anabolic steroids and other performance enhancing drugs circulate.

Concerned by the continuing use of these drugs, Congress passed the Anabolic Steroids Act of 2004, which was signed into law in October 2004 and which amended the Anabolic Steroids Control Act of 1990. Changes include modifying the definition of anabolic steroids to include additional substances, directing a review of the sentencing guidelines for offenses, and amending guidelines to allow for increased penalties. Also mandated are scientifically-based school programs to helps convey the harmful effects of anabolic steroid abuse.