The warning signs of abuse of aspirin, acetaminophen, or NSAIDs are likely to be either the frequent ingestion of pills, if the abuse if chronic or secretive behavior to cover the ingestion of pills; or the symptoms of headache or gastric distress caused by taking many of the substances in large amounts, combined with the symptoms that accompany suicide, if they have been taken for that purpose. The warning signs for suicide given by the National Mental Health Information Center (paraphrased) are:

Note that many of these signs may be exhibited by people who are not suicidal in response to various causes that are not life-threatening.

The warning signs of opioid abuse include the following:

Another sign of use can be the use of any of a large number of street names for opioids. There are a great many of these, as they are specific to the specific drug.

What are painkillers called? 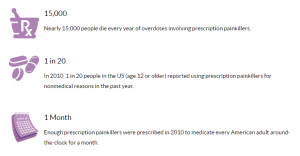 Picking up on the street names may provide a clue to the drug being abused. Since there are different names for each drug, it requires a broad knowledge. Here are some for three of the most used opioids.

One street term for morphine is “God’s drug,” which may come from physicians who, when morphine was discovered by Friedrich Sertuerner of Germany in 1803 tagged it “God’s own medicine,” believing that a safe and reliable form opium had been attained. Several are obvious abbreviations, including a reference to “M” or the sound of the word:

A set of these appear to references to origins of much of the world’s opium through history – China:

OxyContin® is only one form of Oxycodone, but many of the street terms appear to be used interchangeably, including these:

Many of these are obvious adaptations of the name.

Others are specific to OxyContin.