Dangers of Heroin Use 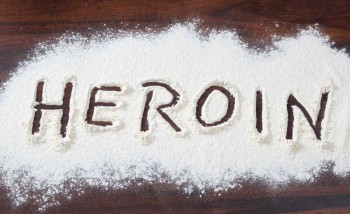 There are many dangers associated with heroin use. In this article we will take a look at some of the possible short and long-term health effects, withdrawal symptoms, and the risk of infection and disease that can be a result of using a shared needle.

Some of the most common additives include:

The method of injecting heroin increases the dangerous problem accompanying dirty or shared needles, such as, infectious bacteria and viruses that cause:

Studies have shown that 50 to 90 percent of all needle-using heroin addicts carry hepatitis C. Even those with less than one year of injecting the drug, had a positive rate of 71.4 percent. Once infected:

The transmission of HIV through IV drug use is huge. Varying from state to state, more than half of all users carry the HIV virus. Internationally the figures are worse. It is estimated that 74% to 91% of heroin addicts are HIV positive.

In addition, excess needle use continually traumatizes the blood vessels causing them to collapse. This forces the user to switch to other locations around the body. Injection sites include:

The following chart from DrugAbuse.gov shows some of the possible health effects associated with the use of heroin: 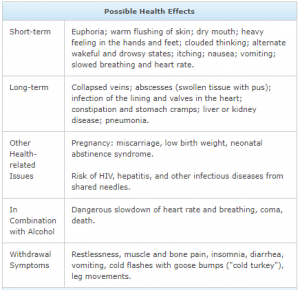 Users frequently experience a condition known as “Cotton fever,” caused by endotoxins. This short-term bacterial infection results in fever, chills, tremors, aches and pains. In addition, septic abscesses and ulcerations are common in IV drug users. They also experience lesions or “tracks” which are scars on the skin often caused by constant inflammation of the injection site. One of the worst infections is necrotizing fascitis and infection that destroys fascia and subcutaneous tissue but is not immediately visible on the surface skin. This is known as the “flesh-eating disease.”

Heroin Use and Dangers Sources: