What is Hydrocodone and How Does it Work?

Hydrocodone is opioid based, but is also partially lab created. The opioid works by controlling certain receptors in the brain that govern pain, which is often why the user describes a feeling of euphoria after taking the drug. The analgesic potency of hydrocodone is similar to Morphine. When Hydrocodone is used as a medication it is typically used as a combination drug, most frequently used with cough suppressants like codeine and acetaminophen.

It is included with many prescription name medications namely – Vicodin, Lortab and Lorcet. Other combination drugs include – ibuprofen (Vicoprofen), aspirin (Lortab ASA) and antihistamines (Hycomine). Because hydrocodone is used in so many combination prescriptions, it is currently the most commonly prescribed drug in the United States. 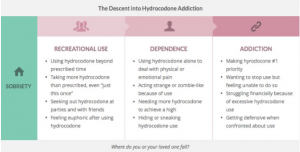 Because hydrocodone is commonly prescribed by doctors, it only stands to reason that it can easily find its way into the hands of those looking to abuse the drug illegally. Because of its opioid base, hydrocodone can be used to help users get high – just like other opioid medications like morphine, fentanyl or illegal drugs like heroin.

When opioid-based drugs like hydrocodone are abused too frequently for an extended period of time, it can result in changes to the brain. These changes impact the pain receptors. The desire to feel pain free, or euphoric, grows stronger and more difficult to appease with each use. This is how addiction begins. It requires more of the drug in more frequent intervals to achieve the same high.

The American Society for Addiction Medicine and the National Institute on Drug Abuse now state that opioid dependence has become a chronic brain disease, and in many cases can become fatal if left untreated.

Warning signs of a Hydrocodone Addiction include:

Side effects for hydrocodone use range from common to rare but severe. The rare, but severe, side effect more likely result when the drug is being abused by the user. Common side effects include:

Severe side effects include:

Illegal Use of Hydrocodone:

If you, or someone you know, is abusing a drug like hydrocodone, or a drug that contains hydrocodone like Vicodin, Lortab or any of other brand names for hydrocodone, be sure to seek the help of a medical professional right away to begin the path to addiction recovery.