For LSD, the term withdrawal does not have the same meaning as for drugs that are habit-forming or addictive. While LSD use can rapidly lead to tolerance, it is not addictive. It’s is unknown at this time how effective behavioral therapy could be in helping to treat regular users of LSD.

However, since symptoms caused by LSD use can continue, the former user may still have repercussions of usage to deal with. This could include: 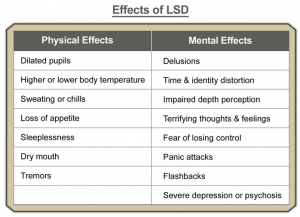 Any treatment of LSD usage has to be preceded by determining the cause. There can be difficulty making a diagnosis and friends or family may be able to help in identifying the cause of the immediate symptoms. Patients who seek medical care may appear to be psychotic, be experiencing extreme anxiety or panic, or present with traumatic injuries that can result from the distorted perceptions that accompany LSD use. Depending on the presentation, LSD use may need to be distinguished from:

An overdose of LSD may result in the following, each of which needs to be treated directly:

By the time someone having a bad trip on LSD gets medical attention, it is usually too late for stomach pumping, unless there is another substance involved that requires it. Approaches include minimizing stimulation using a quiet, dark room and conversing with the person to help mediate reality for them and calm them. Reassuring the person of his or her identity as well as yours may be quite important. It is best not to leave the person alone. If the person cannot be calmed in this way, sedatives may be used. Steps may also be taken to prevent frequent complications, such as hyperthermia.