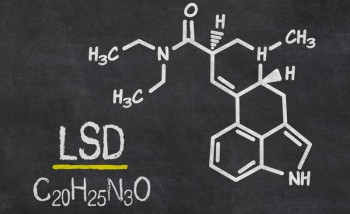 LSD has the most unpredictable psychological effects including delusions and hallucinations, which are serious distortions in reality perception, LSD trips can be really good or really bad. Hallucinations may be aural and tactile, as well as visual. While it is not addictive, LSD does create tolerance, so that repeat users may need to take more to achieve the results previously achieved with less.

Drugs or substances that are not sold over the counter (OTC) are divided into five schedules, labeled with Roman numerals. Schedule I is for drugs for which there is no currently acceptable medical usage in the U.S. It includes, for example, heroin and marijuana. For Schedules II-V, all drugs with medical use, the least restricted is Schedule V, which includes medications like cough medicines with codeine; the most restrictive is Schedule II, which includes highly addictive drugs like morphine, cocaine, and methadone. LSD is placed in Schedule I.

The description of the origins of LSD is given by its discoverer, Swiss chemist Albert Hoffmann, in his manuscript LSD – My Problem Child. During researches into ergot, a fungus, for a pharmaceutical company, it became necessary to create lysergic acid synthetically. Because it was unstable, he created a number of different compounds with it. The twenty-fifth of these lysergic acid compounds, lysergic acid diethylamide (LSD-25) was produced in 1938.

Because LSD-25 was not of immediate interest, testing was discontinued. Five years later, in 1943, convinced that it might have some additional use, Hofmann created another sample. And though he was meticulously careful, he had a very strange experience that day – a combination of restlessness and slight dizziness, which passed into a hallucinatory state that was very pleasant and lasted about 2 hours. 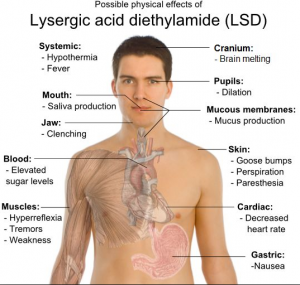 Hofman tentatively identified the experience as resulting from a small amount of LSD-25 being absorbed through his skin. But to be sure, he set out to test LSD-25 3 days later by ingesting some purposely, inducing the first purposeful LSD trip, and the first “bad trip” as well. However, after a period of terror in which he thought he’d been taken over by a demon, the pleasant state of the first time returned, again with kaleidoscopic images, etc.

LSD first came to the U.S. in 1949, and was used as an experimental drug in the 1950s and 60s to treat alcoholism, among other purposes. It reportedly was sold on the street beginning in 1963, and as increasing numbers of reports recorded adverse effects, first California in 1966 and then the federal government in 1967 restricted its use.

LSD and Its History Sources: