While many may associate the medication Hydrocodone with being used typically as a cough suppressant, it is in fact, a partially synthetic opiate that is used to control cough and also pain management. There are dozens of medications that use Hydrocodone. Like other opioid-based medications, there is a possibility for illegal drug abuse of the medication, which can lead to addiction. Read on to find out more about how Hydrocodone works and the abuse statistics surrounding the medication.

Hydrocodone is opioid based, but is also partially lab created. The opioid works by controlling certain receptors in the brain that govern pain. The analgesic potency of the drug is similar to that of Morphine. When Hydrocodone is used as a medication it is typically used as a combination drug, most frequently used with cough suppressants like codeine.

Hydrocodone is in fact the most commonly prescribed opioid-based medication. It is included with many prescription name medications including – Vicodin, Lortab and Lorcet. Other combination drugs include – ibuprofen (Vicoprofen), aspirin (Lortab ASA) and antihistamines (Hycomine).

Street names for the drugs include: Hydro, Norco and Vikes. Tablets, capsules and syrups are typically how drugs containing Hydrocodone are administered for both prescribed medical purposes as well as the street drug versions. 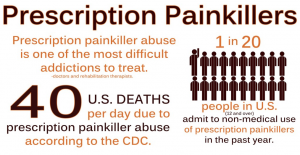 Unfortunately, like many other prescription drugs – especially those containing opioids – Hydrocodone can become addictive if abused by the user. This can (rarely) take place for patients using the drug for long-term pain relief purposes, but typically occurs when the drug is being abused intentionally for the purpose of reaching a high or by someone looking to self medicate.

Many doctors and drug researchers are working to find a balance – one that will allow beneficial pain-relieving drugs to continue helping patients, but will also not become as easily sought after by those looking to achieve an illegal high. However, it is clear judging by the Hydrocodone addiction and abuse statistics listed above, the epidemic surrounding illegal opioid use is a major concern not just in the United States but worldwide.

If you, or someone you know, is abusing a drug like Hydrocodone, Vicodin, Lortab or any of other brand names for Hydrocodone, consult the help of a medical professional right away to begin the path to addiction recovery.