Ketamine is common at raves, where it is often mixed with ecstasy to produce a hallucinogenic effect. Ketamine is also sometimes used as a date rape drug, since it can “freeze” a victim for a short period of time, making her or him mostly unaware of the surroundings and detached with limited movement. Ketamine is most often obtained through smuggling from Mexico or from theft at a veterinary office. It cannot be obtained legally for home use in any circumstance.

When one uses ketamine, one goes to what users call the “K-hole” or to “K-land.” A user is known as a “K-head.”

Effects of Ketamine use 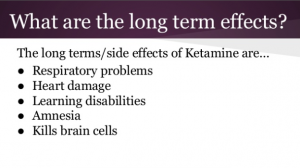 Most ketamine users feel as though they are having an out of body experience. Vivid imagery is common to ketamine use. Combined with ecstasy, the feeling is supposed to be enhanced. Ketamine is a hallucinogen that produces generally mellow effects. However, as with many hallucinogens, flashbacks are likely with ketamine exposure. In fact, ketamine can create larger problems with flashbacks than other hallucinogens. Many ketamine users remain convinced that they have met God or other heavenly beings. Mechanical buzzing in the ears, amnesia and effects similar to intoxication are common. Additionally, coordination and judgment can be affected for hours after the usage.

Some of the more sinister effects of the use of Special K include dizziness, nausea, anxiety, insomnia, blurred vision and ataxia. Short term memory loss and shortened attention span are also effects of Ket use. Ketamine use also causes problems when used chronically or in case of an overdose. Cardiac arrest and cessation of breathing are two of the more dangerous effects. Both of these can lead to brain damage and death in cases of large doses of Special K or continued use. It is also important to note that short-term immobilization is an effect of ketamine use.

Ketamine is most readily available at raves. The drug is not produced as a clandestine drug, since it is complicated to make and the ingredients are usually not close to hand. Most people obtain ketamine for sale by stealing it. It is produced for veterinary and limited human use (strictly controlled) in liquid form, but can be dried (using a microwave, oven or the air) and ground into a powder form. When used illicitly, Special K is most often inhaled. It is not a drug that vets even “prescribe” for home use for pets. It is legally only used in strictly medical or veterinary settings.