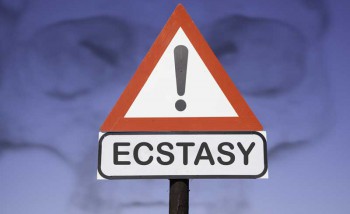 MDMA (3-4 methylenedioxymethamphetamine) is a synthetic, psychoactive drug chemically similar to the stimulant methamphetamine and the hallucinogen mescaline. Street names for MDMA include Ecstasy, Adam, XTC, hug, beans, and love drug.

It is one of the drugs known as “club drugs” for their frequent use in the nightlife scene of teens and young adults, chosen for its ability to create a euphoric state, reduce inhibitions, and create feelings of closeness and empathy. In 2005, it was the club drug most commonly abused, ahead of Rohypnol, GHB, and ketamine.

Ecstasy is mainly distributed in tablets and these tablets often contain other substances, such as methamphetamine, ketamine, caffeine, amphetamine, and MDA (3,4-Methylenedioxyamphetamine) – a substance much like ecstasy.

Drugs or substances that are not sold over the counter (OTC) are divided into five schedules, labeled with Roman numerals. Schedule I is for drugs for which there is no currently acceptable medical usage in the U.S. It includes, for example, heroin, LSD, and marijuana. For Schedules II-V, all drugs with medical use, the least restricted is Schedule V, which includes medications like cough medicines with codeine; the most restrictive is Schedule II, which includes highly addictive drugs like morphine, cocaine, and methadone. Ecstasy was placed in Schedule I in 1998. 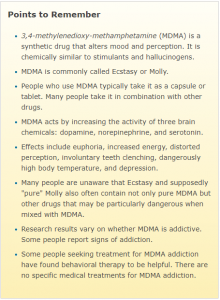 Although it is commonly reported that ecstasy was developed as a “designer drug” – a drug synthesized in imitation of an illegal drug to avoid anti-drug laws – and created by German pharmaceutical company Merck in 1912 in order to suppress the appetite and treat obesity, an article published in July, 2006 in Addiction says that this is untrue, and spread by copy and paste error, rather than research.

In a paper called “The origin of MDMA (ecstasy) revisited: the true story reconstructed from the original documents,” three German researchers report that a thorough analysis of Merck’s historical archive from 1900-1960 yields no data about plans for an appetite suppressant in that time. Instead, they found that while MDMA was, in fact, first synthesized at Merck in 1912, it was developed as a precursor to other substances with hemostatic properties – the ability to arrest bleeding. As such, it was not tested pharmacologically, and it was called Methylsafrylamin. It was eventually studied on its own in 1927 and 1959, but not tested in humans.

In 1967, Dr. Alexander Shulgin resynthesized MDMA. Dr. Shulgin is know for inventing “80% of the world’s known hallucinogenic drugs”. He had heard it was considered a stimulant but didn’t have the same effects as one. During testing, he discovered its power to lower inhibition, and thought it could be useful in psychotherapy, he then distributed samples to psychologists. It was used legally for a while in the treatment of PTSD (Post Traumatic Stress Disorder) among other things. Once the dangers and side effects of this drug started to be manifested they discontinued the use of the drug. MDMA was made illegal in 1985.

The History of Ecstasy Sources: