Many of the warning signs of ecstasy use are fairly mild and non-specific, and can only raise general concerns.

One characteristic and pervasive effect that can be identified is jaw clenching, if more than a small amount of the drug is used. 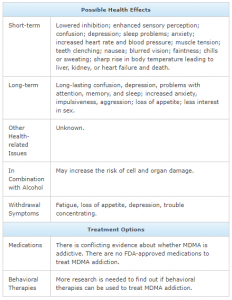 Graver effects that follow a single usage, while non-specific, may be more noticeable because they can last up to several weeks include:

The failure of body temperature to regulate properly can lead to high body temperatures that can cause liver, kidney, and heart damage, and these might be the indicators of some problem.

Repeated exposure to ecstasy in nonhuman primates, reports the National Institute on Drug Abuse (NIDA), for 4 days causes brain damage that is still measurable 6 to 7 years later. This has, of course, not been paralleled in humans, but suggests that ecstasy use over time may cause permanent brain damage, including problems with serotonin nerve terminals and transporters, memory, and learning.

Because Ecstasy tablets often contain other substances, such as methamphetamine, ketamine, caffeine, amphetamine, ephedrine, DXM (Dextromethorphan, a cough suppressant, sometimes used illegally on its own as well), heroin, cocaine, and MDA (3,4-Methylenedioxyamphetamine) and MDEA (3,4-Methylenedioxy-N-Ethylamphetamine)• substances much like ecstasy• there may be other warning signs arising from those substances as well. Reportedly, some so-called “ecstasy” pills contain no MDMA at all. Sometimes they do contain one of the similar drugs, MDEA or MDA, and sometimes contain no psychoactive drug whatsoever. In addition, a popular technique referred to as “candy flipping” involves taking both ecstasy and LSD, and in this case, as well, the effects, and therefore the warning signs, might differ.

Another way to recognize use is if the person refers to the substance.

As is often the case with street names, some of those for Ecstasy are variations on some element of the substance’s chemical name, 3,4-methylenedioxymethamphetamine.

Ecstasy, its most popular street name and one that references the feelings of unrestraint and intimacy that it fosters, has many variations of its own:

Others vary the theme of referencing the effects by invoking the desire for physical contact and intimacy:

There are many other names as well.