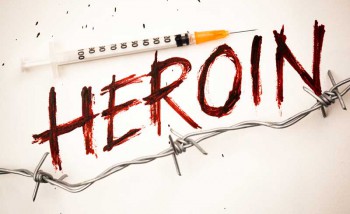 Heroin tolerance happens when the body tries to neutralize heroin. Therefore, the body’s adjustment requires the user to increase the dosage to achieve the same effects as the first hit.

To neutralize the substance the body may:

In addition, because tolerance occurs rapidly, users might need ten times as much drug in as little as ten days. In fact, there is almost no limit to the development of an opioid (heroin) tolerance.

However, the body does not develop a high tolerance for body functions such as:

Pain relief and the desire for pleasure along with tolerance, tissue dependence and the fear of withdrawal are the main reasons for heroin’s addictive nature. The body’s ability to adapt to the effects of the drug can alter the brains chemistry. Sometimes this is a permanent alteration of brain function. Therefore, when chronic heroin stops, the body has less ability to produce its own dopamine and the user has less ability to feel elated or normal. This in turn intensifies a users desire to use the drug again to feel normal. 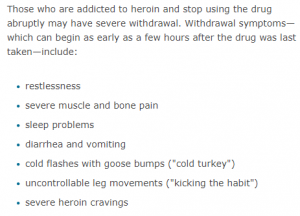 Powerful opiods such as heroin have two main withdrawal phases:

Acute withdrawal occurs when tissue dependence has developed after chronic use and the person suddenly stops using. The body has a rebounding effect as it tries to return to normal too quickly. The symptoms of acute withdrawal can occur within 8-12 hours after cessation of chronic use and reach a peak of intensity within 48 hours then gradually subside over 5-7 days.

Symptoms of acute withdrawal include:

Protracted withdrawal or extended withdrawal symptoms last for months after abstinence has begun, starting from week 4 up to week 10. 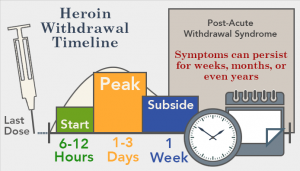 Initial symptoms include a mild increase in:

The next phase that can last 30 weeks or more includes a decrease in:

The discomfort and other psychological factors increase the chances of a relapse. This phase also includes the occasional recurrence of acute withdrawal symptoms brought on by the environment such as, sight, odor, or the neighborhood that stimulate an addicts past memory of using and can last for several decades after a user stops. This phenomenon is known as:

It is important to remember that although acute heroin withdrawal feels like an incredibly bad case of the flu, it is almost never life threatening. Unfortunately, since acute opioid withdrawal symptoms can be extremely painful and seem so frightening, creating anxiety, the fear of withdrawal becomes a greater trigger for continued use of the drug than the desire to have the rush.