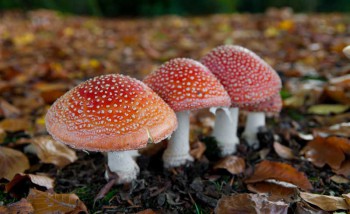 What Are Magic Mushrooms?

There are about twelve different varieties of magic mushrooms that grow around the world. The mushroom is often compared to drugs like LSD because of the hallucinogenic effects that take place after ingesting the shroom. Magic mushrooms work because they contain the psychedelic chemical psilocybin, which is what causes the altered effects on a person’s senses. They are typically eaten raw, cooked or stewed into a tea and drunk. They can also be dried and then stored for later use. Once the drug has been ingested, it is difficult to stop and may cause a bad “trip” depending on how the chemicals affect your brain. A bad experience can cause the users to feel out of control and extreme feelings of paranoia. Magic mushrooms are also sometimes confused with poisonous mushrooms and deadly fungi, which can cause serious illness like severe stomach pains and diarrhea, and sometimes even death.

What Are the Effects of Magic Mushrooms? 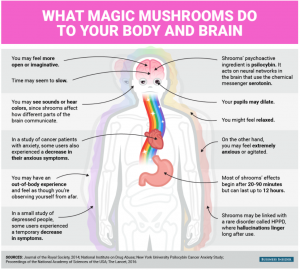 Magic mushrooms can affect users in many different ways, which is why it can be so dangerous to use them. Hallucinogens have been known to cause the user to act in paranoia mode, which can result in suicide and homicidal attacks. Under a trip, users are no longer in control of his or her senses. It is difficult for the user to even concentrate, let alone control their behavior. Other symptoms include restlessness, increased heart rate and hallucinations. These effects begin usually about 30 minutes after ingestion and continue for about four hours. The user typically falls into a deep sleep, but can also attempt to act out their hallucinations. If the user is having a bad trip and experiences severe paranoia, they may act out their worst nightmare, which can result in homicidal or suicidal tendencies.

The chemical structure of psilocybin works like the neurotransmitter in the brain called serotonin. However, the primary effect of the chemical works on the receptors for serotonin. One of the most dangerous parts of taking any hallucinogenic drug is that the chemicals overtake the brain’s ability to create serotonin naturally. If the drug is taken long enough or frequently enough, the brain will stop producing serotonin on its own and instead will cause the brain to become reliant on the psilocybin. The brain then cannot produce that chemical until the drug taking stops. This will impact a person’s senses and damage them potentially for life. The drug user may never be able to smell, taste, hear, see or touch with the same response again.

The Dangers of Magic Mushrooms:

Another one of the most dangerous aspects of eating magic mushrooms is that they are so difficult to tell apart from other types of mushrooms that can be life threatening to ingest. Many mushrooms that can be bought on the streets from dealers may also be contaminated with other drugs like LSD or PCP. In recent years, over 10,000 cases of poisons were reported to local poison control centers. Unfortunately the majority of these cases were from children under the age of six years old. Because these side effects to shrooms or magic mushrooms are so dangerous, it is important to understand these risk before ever consider trying the drug. If you are a parent, be sure your teens understand how shrooms work and the dangers involved with taking this drug. Talk to your teen about teen drug abuse and don’t be afraid to get specific. The more your teen knows about the risks and dangers involved with eating magic mushrooms, the more likely they will be to make a smart decision when and if they are ever presented with the opportunity to take the drug.