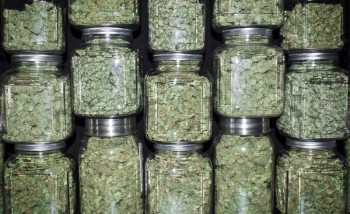 Marijuana users develop tolerance to the drug in a rapid and dramatic fashion. Although high-dose chronic users can recognize the effects of low THC, they are able to tolerate much higher levels. However, the first time user might experience some of the more severe emotional and psychic effects of a high dose. In addition, marijuana persists in the body of a chronic user for up to three months while the effects last only four to six hours. Moreover, the amount of marijuana left in the body can interfere with physiological, mental and emotional functions.

Lack of immediate withdrawal symptoms lead many people to believe that withdrawal does not occur. In actuality, withdrawal from marijuana is delayed because much of the THC continues to be retained in the brain. Only after a relatively long period of abstinence will the withdrawal effects appear. These can include: 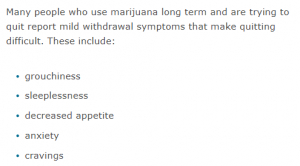 Although not everyone experiences all of these symptoms, everyone will experience some of them. Recent human research demonstrated that irritability, anxiety, aggression and even stomach pain from marijuana withdrawal occurred within three to seven days of abstinence.

In 1994, French scientists discovered an antagonist that instantly blocks the effects of marijuana, allowing them to research signs of tolerance, tissue dependence and withdrawal. The experiments found that cessation of marijuana could cause true physical withdrawal symptoms. In addition, they indicated that marijuana dependence occurs more rapidly than previously suspected. Further human studies have shown rapid eye movement (REM) changes. Including decreased REM while smoking marijuana and increased REM during withdrawal.

Marijuana is addictive. Marijuana has the potential to induce compulsive use in spite of negative life consequences. Research from the 1990’s to today, have provided evidence of marijuana’s addictive nature. Many people smoke marijuana in a chronic compulsive way and have difficulty discontinuing use. When someone smokes marijuana the chemical THC over stimulates the cannabinoid receptors leading to disruption of normal function. This over stimulation produces the intoxication experienced by marijuana smokers. Over time, it may alter the brain’s function and cause symptoms leading to withdrawal and addiction.

A study in 1999 from the Office of National Drug Control Policy studied the effects of Marijuana and medicine. The conclusions, in part, reported that:

Medical marijuana use remains the controversial new battleground. Although marijuana has been employed as a medicine for more than 5,000 years, it is used sparingly today. Proponents say it should be available as a medicine. However, opponents say there are better medicines that are more reliable and do not have the other chemicals with un-researched side effects. In addition, several states have passed laws allowing the medical use of marijuana, while federal law prohibits its use.