Alcohol rehabilitation can be a difficult choice for those alcohol abusers who know it is time to make a change in their life. However, alcohol rehabilitation is a great way to get yourself or a loved one on the road to recovery. For many, drinking alcohol is simply a type of entertainment or a way to relax and enjoy the evening with a glass of wine, or an ice cold beer. However, some take this concept of alcohol in moderation too far and begin drinking too much and too often. Drinking everyday, starting earlier and earlier in the day is a way that many will begin the slippery slope into alcoholism.

The signs of alcoholism:

Alcoholism is known as alcohol dependence and is considered to be an actual disease that needs to be treated professionally and accurately. This disease often includes four symptoms:

Alcoholism carries a large stigma, and many do not understand it is an actual disease, that those who undergo the effects of alcoholism are actually being afflicted with a real disease. People may not understand why basic will power cannot be used to stop drinking. However, the effects of alcoholism overpower that willpower that is needed to stop drinking at such unhealthy levels. This is when alcohol rehabilitation will need to come into play to make a real recovery. While some alcoholics will be able to overcome the alcoholism on their own. Most cannot, which is why they need to engage in some kind of alcohol rehabilitation treatment in order to successfully stop drinking.

Alcohol abuse is different from alcoholism but is often a breaking point for a user. They may wish to seek out alcohol rehabilitation before the effects of alcohol abuse get out of control or reach the levels of alcoholism. Alcohol abuse symptoms occur when alcohol gets in the way of a person’s day-to-day life leaving them unable to perform certain tasks at work, home, or school. Many times those who abuse alcohol will drink in settings that can cause a dangerous situation for them or others including drinking while driving or operating heavy machinery. Those who abuse alcohol also might have recurring problems with alcohol and legal problems like drinking under the influence (dui) charges, etc. 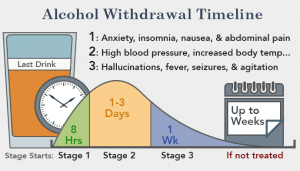 A serious alcohol abuse problem that involves a physical need is called alcohol dependence. In such cases, the body actually needs the alcohol. When the alcohol is suddenly taken away, withdrawal symptoms become manifest, as they would with any other drug addiction that has been interrupted. Alcohol withdrawal syndrome is manifest in several ways. The longer and heavier the alcohol abuse, the more severe the symptoms of alcohol withdrawal will be. Here are some of the symptoms that can accompany a sudden cessation of alcohol use:

These symptoms can come on as soon as several hours after the alcohol intake has stopped. However, it is also possible for the symptoms to take longer to become manifest. Sometimes it can take a few days for alcohol withdrawal syndrome to really begin.

If you have experienced any of these issues either with being an alcohol abuser or an alcoholic, it is time to consider alcohol rehabilitation. If you have a loved one who falls into one of these categories, it is a good idea to encourage them to seek help before they harm themselves or someone else. Getting well depends on the severity of your alcohol abuse or alcoholism effects.